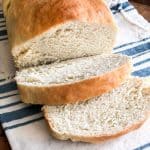 When we lived in England last year there was something about the food that I noticed that was quite different. In particular, no matter what kind of bread I bought there it would go moldy very quickly. (Produce too!)

I got in the habit of buying fresh bread at the bakery every two or three days rather than counting on a loaf lasting the week.

Why I Bake My Own Homemade White Bread

When we moved back to the US I didn't think much of it until one day recently when I realized that we had the same packs of sandwich bread and hamburger buns on the kitchen counter for about three weeks and they never molded.

While that might sound like a good thing it made me seriously question what in the world was in that bread that kept it preserved for that long and whatever it was, did I really want to be feeding it to my kids?

Right then and there I decided to make my own bread instead of buying it. I used to make bread all the time but as we added to our family and got busier I got away from it.

Making bread sounds complicated to a lot of people but in reality, it's not hard at all. You do need to allow time for the dough to rise twice but the actual active prep time is less than 30 minutes.

This is one of my favorite easy homemade bread recipes. I've heard it called Amish bread, Amish Sweet bread, or Amish butter bread...I have no idea if it's an actual Amish recipe so please forgive my ignorance on its origin, I received the recipe from a friend when I was pregnant with my oldest son about 12 years ago and it's been a favorite ever since.

It's so easy you can't go wrong, even my kids can make it with minimal supervision.

I like this bread sliced with homemade garlic butter or toasted up into Texas Toast with dinner. It's sweet, buttery and dense...my mouth is already watering!

If you try this recipe please comment and rate it below, I love hearing from you!

Join our community of over 20,000 everyday cooks and I'll send you an eCookbook with 13 of my favorite desserts as a welcome gift!

Success! Now check your email to confirm your subscription and get your free eCookbook!