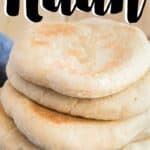 It's easier than you think to make your own homemade naan. With this easy naan recipe, you don't even need a tandoor oven, just a little patience, and 5 easy ingredients!

I love Indian food. The year we lived in England our entire family tried a wide variety of curries and other Indian foods popular there and it is now one of our favorite cuisines. We now usually have curry and naan at least once a week on the menu!

What is Naan Bread

Naan is a soft and pillowy flatbread popular in India and across Asia.

Naan is a leavened bread made from maida, an Indian white flour that is very delicate and powdery, similar to pastry flour. It is eaten most often with curry, used instead of a spoon to sop up all of the sauce and to pick up vegetables (and meat).

Naan is usually cooked quickly in a hot tandoor, a cylindrical clay and brick oven with a dome-shaped top. Since this type of oven has an open flame, temperatures are often in excess of 500 degrees Fahrenheit. Typically, the dough is hurled towards the wall of the oven, where it sticks. There, the bread bakes until it puffs up and chars slightly in spots, and then is removed from the oven with a stake.

How to Make Naan Bread without a Tandoor Oven

Luckily for us, it's possible to make naan bread at home without a tandoor oven. You can achieve the same effect by using an electric griddle or large skillet.

There are only a few simple ingredients needed to make this simple naan recipe. Once you master the basic recipe it is fun to experiment with adding other seasonings too!

How to Make Naan Bread

In a large bowl, combine warm water, yeast, and sugar. Allow the mixture to sit until it's nice and frothy.

Add the flour, then the salt and mix well. I use a stand mixer (affiliate link) with a dough hook but you can mix and knead it by hand as well, the end result is the same!

Roll the dough into a ball and place into a bowl that has been coated with nonstick spray.

Cover the dough with a damp paper towel and let it rise for one hour.

After the dough rises, divide it into six pieces.

Roll each piece out on a floured surface until it's about 6 inches across.

Then simply heat your griddle or skillet to medium-high heat and cook the naan for 2-3 minutes on each side or until firm with light brown spots!

I like to brush my naan with a little melted butter after cooking and serve it nice and warm. It's perfect for serving alongside your favorite curries!

If you like this naan recipe you will also enjoy my 15-minute Homemade Biscuit recipe, Easy White Bread, and Homemade Mellow Mushroom Pizza Crust.

It's easier than you think to make your own homemade naan. With this easy naan recipe, you don't even need a tandoor oven, just a little patience, and 5 easy ingredients!