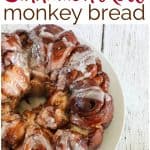 Is it dessert or breakfast? This Easy Cinnamon Roll Monkey Bread is easy to make thanks to premade dough and tastes amazing!

I would like to take a moment to apologize if you might be on a diet or maybe trying to lose a few pounds….because this most definitely is NOT the recipe for you.  I know, because I have been trying to eat cleaner lately and then I made this last week to post on the blog and it was literally painful not to eat the entire thing.

It’s good y’all.  Really good.  And so darn easy to make too.

It’s like the entire universe aligned to make this one beautiful ooey gooey Cinnamon Roll Monkey Bread just to make your mouth water.  My mouth is watering just writing this and remembering how delicious it was!!

The entire recipe started because I noticed on a recent grocery trip that Pillsbury had Cinnabon Cinnamon Roll Dough in the refrigerator section, already made and it came with frosting.

I had already planned to share another Monkey Bread recipe this month but I got to thinking that I could use that dough to make a Cinnamon Roll version and oh I’m so glad I did! You’ll need 3 containers of the Cinnamon Roll Dough.  Be sure to set aside at least one of the frostings (I only used one but by all means use as much as you want!!)

How to Make Monkey Bread with Cinnamon Rolls

Divide each of the premade cinnamon rolls into two and roll each half into a ball. Toss those dough balls into a gallon plastic bag as you make them.  When you’re finished, pour 1 cup of sugar mixed with 1 tablespoon of cinnamon into the bag, close it and shake it up to coat the dough.

Place the coated dough balls into a greased bundt pan.  In a bowl , microwave 1 stick of butter, 1/2 cup brown sugar, and 2 tablespoons of maple syrup for one minute.  Stir until uniform and pour over the dough mixture.  Bake at 400 degrees for 35 minutes or until the inner dough is baked through and the outside is a deep golden brown.  Allow to cool five minutes before inverting onto a plate and topping with frosting.

Please excuse me while I run to the store to buy the ingredients to make myself another….

Is it dessert or breakfast? This Cinnamon Roll Monkey Bread is easy to make thanks to premade dough and tastes amazing! 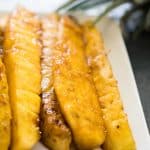 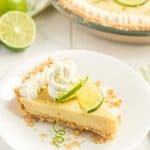 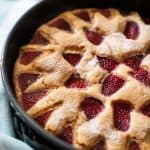 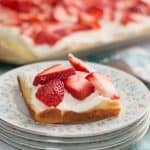