×
Home » Recipes » Cleaning » How to Easily Change a Duvet Cover 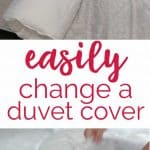 You all know that I'm BIG on making things around the house easier. It's part of the reason I started this blog. Today I'm going to show you a super easy trick that will save you precious time (and frustration) when changing your duvet cover. It's simple once you get the hang of it and it makes it so much easier!

I've heard this called the burrito method or the sushi method before. Basically you will lay your duvet cover inside out on top of your duvet. Tie the corners if there are ties present. Then, beginning at the end without the opening, roll the duvet and cover towards the end with the opening.

Once all the way rolled you will reach your hand inside the pocket to the corner and grab the corner ad flip the pocket over the entire end of the rolled duvet. Repeat on the other side. Then you simply unroll the duvet and it will be covered!

See how simple it is in the video (it's hard to picture from the instructions alone, I know!)

See how much easier that is than the old fashioned way?

Give it a try, it may take a time or two watching the video and practicing to get the hang of it but you'll be a pro in no time!