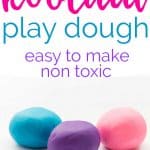 Homemade Kool Aid Playdough is easy to make and nontoxic-hours of fun for the kids! You'll never go back to store-bought once you try this easy recipe!

Pssst....I have a secret. Do you want to know how to occupy your kids for an hour without them looking at a screen.  Yes, it's possible. Simply ask them if they want to make this easy homemade Kool Aid playdough! That's what I did with my three boys last week when the rain wouldn't stop and it was a huge hit-it bought me tons of Mommy time while they joyfully made pizzas, snakes, etc and occupied themselves.  It was glorious!

Why I love homemade playdough

Mix the all ingredients in a small pan. Heat over medium heat, stirring constantly.  When the playdough becomes a ball remove from heat and allow to cool.  Knead the dough until it's uniform. Store in an air tight container.

If stored in an airtight container in the refrigerator this playdough should last at least 2 months.

Can I make this without the cream of tartar?

In a pinch you can make this with baking soda but you will need to experiment to get the right texture. You can also try this no cook playdoh recipe without cream of tartar. (I have not personally used that recipe.)

If your kids like Kool Aid playdoh they might also really like this cool homemade slime (also called Non-Newtonian liquid-so you can get a bonus science lesson in!)