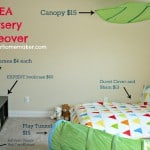 Create a Montessori Style IKEA nursery on a budget. Featuring a floor bed and child-focused design!

I'm so excited to share Tommy's nursery reveal today! As you might remember I have been planning on revamping his nursery for a while, playing with mood boards and reading up on Montessori infant practices.  Just before the move I took my big IKEA trip and now I'm finally ready to share his room!

(This post was originally published in 2012, I have removed links to products above that are no longer available.)

All said and done his room cost me about $140. Not too shabby!

I truly tried to create this room from a baby's perspective.  Everything is meant to be seen from his level, that is why there are no pictures hung higher on the walls and we chose to use a low shelf.

Look at some of the cool baby-level views in the room:

As with most Montessori nurseries, you can see we also use a baby bed instead of a crib, the duvet and pillow we obviously don't use when Tommy is sleeping there alone, it is there for me when I'm laying with him at night (which is more often than I'd like to admit!)

I was a little nervous about him falling off the bed at first-although it is just a regular twin mattress place right on the floor-and he has tumbled a few times but it is low enough that he doesn't hurt himself or cry.  I help him scootch off backwards during the day and he is learning to do it himself as well.

How to Create a Montessori Nursery

In keeping with the Montessori philosophy I kept available toys to a minimum, we store the toys in the closet so that I can rotate them out.  This helps avoid over-stimulation I think. (This post has a TON of links and information about Montessori nurseries.)

On the bottom shelf, I have two IKEA soft toy baskets-one fruit and one veggie.  The next cubbie holds two board books, then one over is a small wooden box with two toy cars.  Two blocks for stacking and a Melissa and Doug wood ring stacking toy complete his current toy selection.

Tommy is not yet pulling up to standing so the top of the bookcase holds items that he can see but not access...obviously, in a couple of months, I will need to move these for safety reasons.  There are three large picture frames and one small standing frame filled with pages from Eric Carle's Animals Animals book (that my three year old ripped up long ago-I salvaged the few intact pages to use upcycle into art.)

I bought a small houseplant to bring some greenery into the room and an old CD player to keep soft music playing. You can see an IKEA wooden bead maze I have in the room also, I love bead mazes for the little ones!

Where to Store Supplies in Montessori Nursery

Luckily the nursery has a small walk-in closet that allowed me to put Tommy's dresser and laundry basket inside as well as store his diapers and wipes.  I keep the diaper changing materials just inside the door for easy access.  I change his diaper on the floor just outside of the closet-I rotate blankets on the floor to protect the carpet from messes. I hung some Wee Gallery Art Cards on the wall above his blanket in an attempt to keep him someone occupied for diaper changes as he's in that wiggle worm phase!

Well thats all for the nursery tour, I hope you enjoyed it! I have been so excited to share it with you! Please let me know what you think!