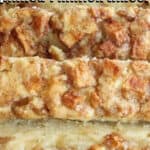 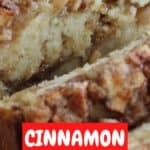 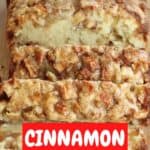 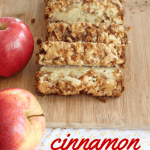 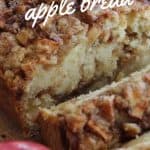 Okay, in my world I've transitioned to Fall-we won't talk about the fact that it's still in the upper 80s or 90s every day!  So apples, pumpkins, mums and gourds are all I can think about!

I whipped up this easy cinnamon apple bread recipe last weekend to prepare for the momentous occasion of college football starting back up and wanted to share it with you today.  This bread is ah-mazingly delicious (I know I made that word up but believe me, it warrants it's own made up superlatives!)

I can't even describe to you how insanely good this apple bread makes your house smell while its baking-and it's perfection to have a slice when it's warm out of the oven! If you try it too I'd love it if you popped back and gave it a five-star review in the comments section!

How to Make Apple Bread

Can I Freeze Apple Bread?

Yes, this bread freezes well. Simply allow the bread to cool completely then wrap in foil and store in a freezer bag. When you are ready to eat the bread, allow to thaw at room temperature before serving.

If you’ve tried this easy apple bread recipe please comment and rate it below, I love hearing from you!

This is the absolute BEST Apple Bread on the internet. Swirled with cinnamon sugar and juicy apple pieces, try this Apple Bread recipe out and see why it has over 250 amazing reviews!

Subscribe to our newsletter and I'll send you a FREE eCookbook with my very favorite easy, delicious bread recipes as a thank you gift!

Success! Now check your email to confirm your subscription and download your eCookbook

« How to Clean Your House FAST
Healthy Living Hacks »